In Elmau, the G7 countries have decided their climate targets – environmental groups are enthusiastic. The agenda includes now the complete departure from coal, oil, and natural gas. 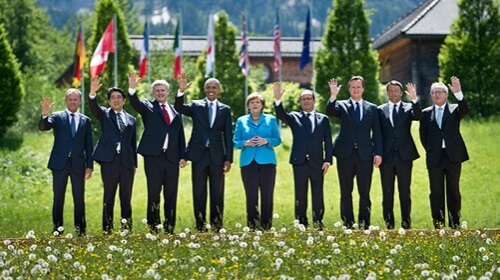 What a turning point: Before the G7 summit in Elmau thousands were protesting against the negotiations between the seven major economies. After the summit, there is now praise from the environmental organizations: “Angela Merkel secures historic climate promises,” exults Avaaz. “The G7 decision is an important milestone,” says the European Climate Foundation. “The direction is right,” said the WWF.

What had happened?
The leaders have announced decisive steps in the two most difficult issues of the climate negotiations in Elmau: curbing greenhouse gas emissions and the provision of climate protection payments to poor countries.

The G7 countries want to reduce the global greenhouse gas emissions to zero in this century. “We know that we need a decarbonisation throughout the century,” German Chancellor Angela Merkel (CDU) said on Monday at the end of the G7 meeting at Schloss Elmau in Upper Bavaria. So she means a complete shift away from coal, oil, and natural gas.

Exports as a lever
Already by mid-2050, the G7 will have their power largely converted to renewable energies. Until then, the global carbon emissions should be already pushed to a third of the amount in 2010.

In addition, the leaders in Elmau stressed the aim promised in 2009 to transfer climate protection payments of 100 billion dollars a year to poor countries starting in 2020, whereby private companies are supposed to help with investments.

Two special measures are listed in the G7 final document: It is to be discussed how export credits may improve the conversion of the energy supply. Because, so far, the loans promote on a large scale the trading of coal power plant technology from Germany in particular, experts see here a lever to reduce greenhouse gas.

In addition, climate insurance are supposed to hedge poor countries against losses from weather disasters. On smaller meetings in the past few weeks, initiators, including Munich Re, highlighted first successes: last year, four insured African countries were paid out three claims totaling 26 million Euros. This way, more than a million people got help by receiving food after droughts; half a million animals were saved from death because feed could be purchased quickly.

Summary: At their summit in Elmau, the seven major industrialized countries have decided on G7 targets for climate protection. By the end of the century, the power supply is expected to be met without contributions from coal, oil, and natural gas. Exports and insurance companies are to be set on climate change.