UBS ANALYSTS: SOLAR WILL BECOME THE “DEFAULT TECHNOLOGY OF THE FUTURE”

Within a decade, solar photovoltaics could account for 10 percent of electricity supply globally, beating out coal and nuclear as “default” power generation technologies.

That’s the conclusion of a new analysis from investment bank UBS, which found that global installed solar capacity will more than triple between now and 2025, and then triple again between 2025 and 2050. By the middle of the century, UBS estimates that nearly 3,000 gigawatts of solar will be installed worldwide.

“We believe solar will eventually replace nuclear and coal, and [be] establish[ed] as the default technology of the future to generate and supply electricity,” wrote the analysts.

Investments in solar could amount to more than USD 3 trillion over the next three and a half decades. 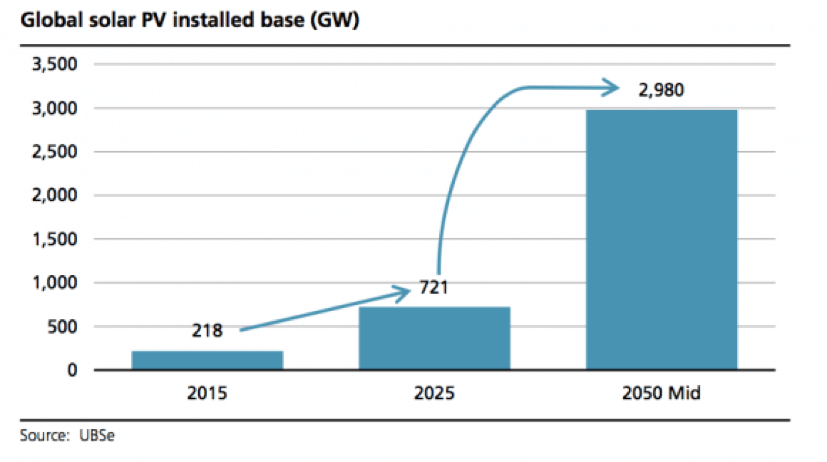 While many believe the rise in distributed solar will hurt utilities as they lose control of their customers, the UBS analysts conclude the opposite. The majority of projects will continue to be utility-scale, they say, making the solar business similar to the wind business.

“Solar ownership is highly pulverized. Yet utilities could have played a prime role, as — just as a reference, during 2013 — about 80% of the projects developed in the U.S. and Europe combined were either utility-scale or utility-like. As already seen for wind activities in the previous decade, we believe utilities will soon begin to achieve scale in solar. We see the potential to develop almost >350GW globally to 2025, which would require some EUR 335 billion of investments,” they wrote.

The analysts also dispute the notion that storage will cause a wave of grid defection. Although battery storage costs continue to fall, the economics are not compelling enough to size systems for full self-consumption.

“Given the economics of energy storage, the high concentration of solar production in just a handful of hours during the year and the batteries’ technical limitations on the number of cycles (charge/discharge), customers will not be able to get off the grid.”

So how much will all that solar cost? The UBS analysts estimate that more than USD 70 billion will be spent on solar subsidies by 2025 — a tiny percentage of global electricity expenditures.

“Although this number may appear huge, we should say that each year the world spends some  EUR 5.6 trillion to pay for its electricity yearly bill, or some 6% of GDP. By then, we estimate annual solar subsidies at  EUR 70 billion on an annual basis. Hence, solar subsidies would appear to be a mere 1% of final bills,” they wrote.

As new plants replace older ones with more efficient technology and development practices, subsidies will fall steadily over the coming years. According to the UBS analysis, new solar projects will average 6 cents per kilowatt-hour within a decade — marking a period when solar will “no longer need subsidies.”

The UBS report is one of many from large investment banks alerting investors to the sudden rise of solar and battery storage.

Their conclusion: “We believe the financial community and most industry experts largely underestimate the global solar capacity growth, as falling costs, supportive regulation and the opening up of new solar markets seem to go largely unnoticed.”